What is the “Paramount Duty” of Washington State?

We take our name from Article IX of the Washington State Constitution, which states: “It is the paramount duty of the state to make ample provision for the education of all children residing within its borders, without distinction or preference on account of race, color, caste, or sex.”

Is the State meeting its constitutional paramount duty?

No. Basic education funding in Washington State is in crisis. Decades of underfunding culminated in the formation of the Network for Excellence in Washington Schools (NEWS) in 2007, and the filing of the McCleary case (described below), which was decided by the Supreme Court in 2012. Even this ruling and the recent contempt sanctions of $100,000 a day, have not motivated the State to fully fund basic education as our legislators promised to do in their own testimony, and as required under the Washington State Constitution.

We refer to “the State” to underscore that both branches of government — the State Legislature and the Governor — are not acting to fulfill their paramount duty.

What is the McCleary case?

This is the lawsuit brought against the State of Washington for failing to meet the constitutional obligation to amply fund basic education. Check out this video produced by the Office of the Superintendent of Public Instruction.

What is basic education?

Basic education has been defined by the State many times over the years, most recently in 2009 when they passed several bills in including 2261 and 2776. These bills define the basics of basic education. They apply only to Kindergarten through twelfth grade (K-12) and even though early learning and higher education are important, they are not included in the definition of basic education in Washington State.

There are also arguably other elements that “could” have been included in the State’s definition in 2009 but weren’t. For example, the basic education “prototypical school funding model” funds a nurse at each elementary school for only 1.5 days a week.

It could be argued that more should be included in the definition of basic education, but at this point, the fundamentals of basic education were defined in 2261 and 2776. And the actual costs of providing the service as defined in these bills is what the State is obligated to fund under law.

Is the State required to fund school buildings needed for basic education?

But isn’t the problem how the school districts manage funds, and not how much money there is?

No. While anyone can quibble with how funds are managed on a local level, the fact remains that the State is not providing the minimum level of funding needed for basic education.

The State took great strides to define the basic funding requirements of basic education in their own testimony to the Supreme Court. They testified about how much teachers, supplies and buildings cost. They promised to make “real and measurable progress”, and to fully fund by the 2017-2018 school year. They are still billions of dollars short of what they promised to fund for basic education now, and in the future. And they have not made “real and measurable progress”, which is why the contempt fines of $100,000 per day were imposed by the Court.

How much funding is the State short of meeting its paramount duty? 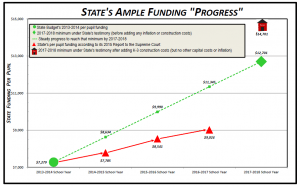 (Click on image above for a full size preview)

In other words, they shortchanged Washington’s children by $3.8 billion for the 2015-16 and 2016-17 school years for the fundamentals of basic education, not including the funding needed for I-1351 (the class size reduction measure). This letter from State Superintendent Randy Dorn to Governor Inslee in December 2014 describes the level of funding that was required. Here is the detailed budget request. And this does not even include the funding needed (about $3 billion for the 2015-16 biennium) for school buildings.

By the 2017-18 school year, the State is short by $4 billion a year for operations costs (teachers and books, etc.) and another $2 billion is needed to build classrooms needed for K-3 class size reductions and all day kindergarten. (See this graph with detailed citations of the amounts promised in per student dollars. Washington has 1.088 million students as of October 2015.) There also is no plan for full funding by 2017-18 school year as they promised.

Why isn’t the State meeting its paramount duty?

In short, our State’s revenue system is both unfair and insufficient to fund the services needed for a healthy and prosperous society, including the paramount duty of amply funding K-12 education.

Washington has the most regressive (i.e. unfair) tax system in the nation. Our State revenues rely heavily on sales tax, property tax and the B&O (Business & Occupation) tax, which disproportionately impacts the poor and middle class. At the same time, even though we have some of the wealthiest corporations and individuals in the country, our state revenues have been declining. In 1995, our state revenue equaled about 7% of the State’s economy. Now it is less than 5%. That is a 30% decline in the adequacy of State funding in less than 20 years. For decades, the State has deprioritized funding basic education in favor of increasing tax breaks, and has pushed the costs of basic education onto local jurisdictions.

Does the State need to do a “levy swap” to meet its paramount duty?

Is this group currently proposing funding solutions that legislators can champion?

Washington’s Paramount Duty is a grassroots advocacy group. We are new and just realizing that our elected officials aren’t yet starting with the same funding goal that the State promised in 2012. Additionally, there still seems to be debate on whether or not an amply funded basic education is the State’s paramount duty. At the moment, we are working on getting our elected officials to simply acknowledge the funding needed and to commit to solving it.

We will support elected officials who propose solutions and are working to fulfill their paramount duty. There are lots of great ideas that have been proposed in the past and are circulating — when some of our elected officials take the lead and propose real new revenue solutions, they will be supported. We, as a group may even coalesce behind specific solutions.

For now, let’s delve into legislators’ records and encourage those that have shown they are willing to play well with others and come up with possible solutions. Please post what you come up with on our Facebook group — this information does spotlight those willing that are willing to act and that’s what we’d like to encourage.

Our role as citizens in a democracy is to vote in people into elected office. Elected officials have their job to do, work together and do what’s best for the children and citizens of our state. We will support the elected officials that are doing their jobs, and will be working to compel those who are not.